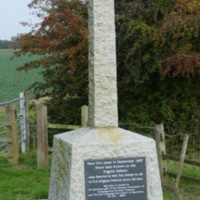 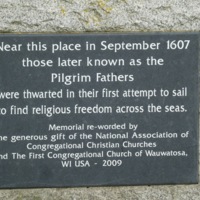 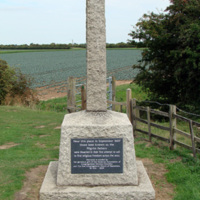 In 1607, the Separatists – later ‘Pilgrim Fathers’ – tried to escape to Holland from Boston on the north-east Lincolnshire coast. Their ships’ captain betrayed them, however, and they were arrested, put on trial and imprisoned.

In late 1954, the Boston Town Council had considered erecting a memorial to the event where the arrest had supposedly taken place (by then known as ‘Scotia Creek’) but had changed their mind soon after because of the ‘remoteness of the site’. They must have changed their mind again, however, because they erected a memorial in 1957 – the 350th anniversary of the betrayal (and, perhaps not coincidentally, a time of increased interest in the Pilgrim Fathers after the voyage of the Mayflower II the same year). The General Society of Mayflower Descendants contributed significantly to the cost – like they did with most of the memorials and plaques that were put up in the 1950s.