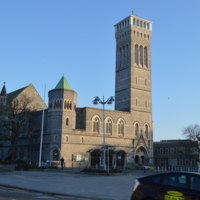 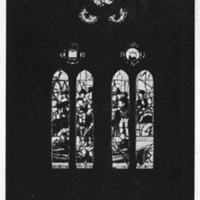 The Plymouth Guildhall, today Grade II listed, was built in 1874 in a Gothic revival style. Part of the new building was a series of fourteen windows that told the local history of Plymouth in connection with the national story of Britain. These windows included scenes like the assembly of the fleet under Edward the Black Prince in 1315, the defeat of the Spanish Armada in 1588, and the proclamation of William III in the Guildhall in 1688. Over the main entrance of the building was a window depicting the embarkation of the Pilgrim Fathers in 1620. With William Bradford at their head, the Pilgrims were on the boat at the Barbican steps that would take them to the larger Mayflower. Designed by John Shelly and made by Messrs Fouracre and Watson, this window was gifted by the present Mayor (Alfred Rooker – a deacon of Sherwell Congregational Church).

The final third of the nineteenth century saw lots of expressions of civic pride like this in British cities; as places boomed through trade and industry, local elites expressed their hopes for the future by cementing in stone and glass the great achievements of their past. Histories of the town, such as A History of Plymouth (1873) by Llewellynn Jewitt, now started to give attention to the Mayflower story. By the time of the Guildhall’s construction the Mayflower was not yet a dominant part of Plymouth’s civic culture – that came later in the 1890s, as the international interest in the Pilgrim Fathers grew – but already it was starting to become a memorialised feature of the city’s history. In 1920, the Guildhall was one location of various commemorations for the 300th anniversary of the Mayflower's voyage.

In 1941, the Guildhall – and other surrounding buildings – were gutted by fire after a Luftwaffe bombing raid. One of the causalities, unfortunately, was the Mayflower window.