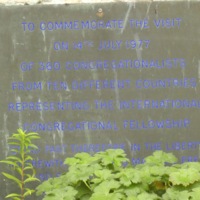 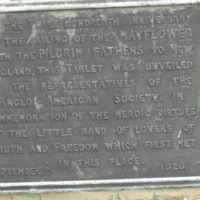 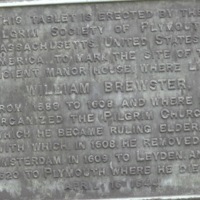 Scrooby, in Nottinghamshire, is famous today for its associations with the Pilgrims as the home of William Brewster and a meeting place for the Brownist congregation led by John Robinson and Richard Clyfton. It was not until the late 1840s, however, that the historian Joseph Hunter discovered these links – and, by that point, the manor house had been demolished. With no site left, and as a small and not easily reached village, making Scrooby into a site of Mayflower memorialisation happened more slowly than in the bustling ports of Southampton and Plymouth or the vibrant Congregational community of London (though William Henry Bartlett did provide a sketch in his 1854 work). By the end of the nineteenth century, as interest grew more broadly in the Pilgrims, the site of the manor house was starting to be recognised as a key point of interest.

The first great visit by Americans came in 1891, when the inaugural International Council of Congregationalists took place in London. A delegation travelled up to Scrooby to visit the place ‘where William Brewster sheltered the persecuted band of Puritans until they fled to Holland, and subsequently became members of the famous and faithful band known as “The Pilgrim Fathers.”’

Around this time the Pilgrim Society of Plymouth, Massachusetts, also erected a bronze tablet on a farmhouse in the vicinity of where the manor house had once stood:

This tablet is erected by the Pilgrim Society of Plymouth, Massachusetts, United States of America, to mark the site of the ancient manor house where lived William Brewster, from 1588 to 1608, and where he organized the Pilgrim Church of which he became ruling elder, and with which, in 1608, he removed to Amsterdam, in 1609 to Leyden, and in 1620 to Plymouth, where he died April 16 1644.

After this point Scrooby was memorialised in art and poetry, like the travel guide of Marcus Huish, and sold to descendant tourists as a romantic image of England’s rural past.

In 1919, on the eve of the massive 300th anniversary celebrations, another important visit took place – this time from the Sulgrave Society of America (or ‘Sulgrave Institution’). The Earl of Wharncliffe, welcoming the visitors on behalf of the Sheffield Anglo-American society, could not help but wax lyrical about how ‘the descendants of the Pilgrim Fathers’ – ‘as very often happened with members of the same family’ – had come back into touch with their ‘cousins’ because of the First World War. The Anglo-American Alliance that ensued had ‘established a brotherhood… across the Atlantic’ that would ‘preserve peace in Europe for all time.’ The Reverend Alfred Hall reminded the visitors that they all ‘belonged to the race which produced William Brewster and William Bradford’ – one of ‘sterling Anglo-Saxon qualities’ that had ‘contributed so much to the development of the twin principles of law and liberty.’

In 1920, when another tablet was erected, it was this Anglo-American relationship and the ideal of ‘freedom’ that was memorialised:

On the Three Hundredth Anniversary of the sailing of the Mayflower with the Pilgrim Fathers to New England, this tablet was unveiled by the representatives of the Anglo-American Society, in commemoration of the heroic virtues of the little band of lovers of Truth and Freedom which first met in this place. September 2, 1920.

As the Nottingham Journal rather boldly put it, ‘out of Scrooby undoubtedly came the greatness of America! Scrooby was the acorn to the oak at which the world now marvels’.

In following decades, and up to the present day, Scrooby has remained an important part of Mayflower heritage in Britain – especially for Congregationalists making ‘pilgrimages’. In 1977, for example, a new plaque was erected to commemorate the visit of 360 Congregationalists from ten different countries (under the auspices of the International Congregational Fellowship).

I now live in England, I would love to bring the Children and Grandchildren to Visit Scrooby Manor House! How exciting!!