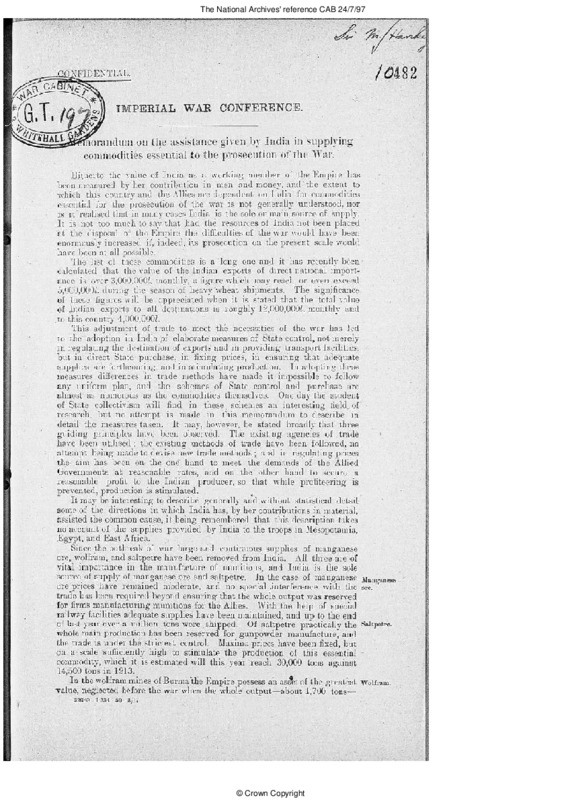 India not only contributed a large number of troops to the Mesopotamia campaign, but also supplied a good amount of raw materials. This memorandum outlines the contribution of India’s raw materials to the First World War. It shows the broad range of materials supplied from India such as manganese ore, saltpetre, wolfram, mica, shellac, jute bags, raw jute, hides, tanning materials, wool, oil seeds, wheat, rice, forage, coal and the uses that they were put to. In some cases, such as mica and shellac which were used in ammunition, India was the main source of supply and for teak and opium, it was the only source of supply.

This memorandum originated from the need to recognise the extent of the Indian supply of raw materials which was not generally understood. The immense value of the Indian material contribution is acknowledged in this statement, “Had the agricultural and mineral resources of India not been made available the prosecution of war in Europe on its present scale would not have been possible.”

This would be useful for those researching the economic history of the war and the Indian contribution or those examining the amount and usage of Indian exports to Britain.

← Review of the Military co-operation of the Self-Governing Dominions and of India
Duff, General Sir Beauchamp: correspondence with →
Memorandum on the Assistance given by India in supplying commodities