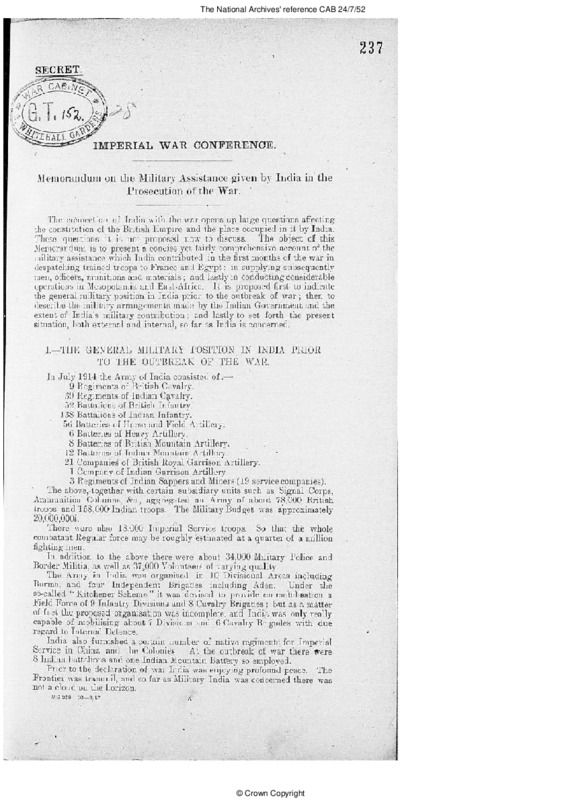 This document details the assistance given by India to Britain in the first months of the war in sending troops to France and Egypt and in supplying men, ammunition and materials for Mesopotamia and East Africa. It highlights the various theatres of war in which Indian troops participated such as Germany, France, Egypt, Persian Gulf, Singapore, and Mauritius. It highlights that the ‘Indian army has been of great assistance to the empire in this world war’ (p. 10). In Egypt, for example, Indian troops were the only fully trained soldiers.

It begins by providing the organisation of the Indian army before the war and then explains the number of troops called for the campaign as well as the process of recruitment. It ends with understanding the impact of this deployment on the army in India itself noting that it ‘denuded India of the bulk of its troops and drained off the cream of its armed forces’ (p. 8) thus comprising India’s own security under the British colonial government.

The document would be useful for military historians as it provides the number of troops and units despatched to each region covering figures for the number of officers divided by rank and file, provides medical casualties (which were roughly 30% of all the troops sent initially) and materials supplied. The document also contains figures for the number of ‘other personnel’ sent to the war like menials, labourers and artisans, and would be useful for those working on labour history. However, the figures only consider events till the autumn of 1916.