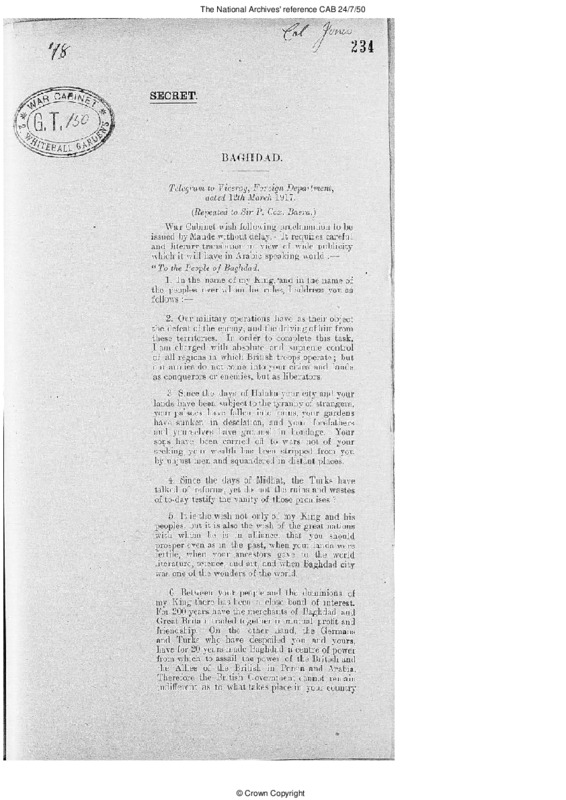 This telegram to the Viceroy of India contains a draft of a speech prepared by the War Cabinet to be delivered to the people of Baghdad after the British capture of the city. In this speech, Britain was depicted as the 'liberators' of Baghdad from the tyranny of the Ottoman Turkish empire. This rhetoric was mirrored during the 2003 invasion of Iraq by the Anglo-American forces.

Although the speech clarified that the War Office wished to continue the occupation of Baghdad, the address depicted Britain as 'liberators' that 'the Arabs' had been waiting for. What was also deceptive about this narrative was that the speech did not acknowledge the majority Indian – not British – contribution to the advance on Baghdad. It also demonstrates how Britain used the military manoeuvres of the First World War to further its imperialist expansion into the Middle East. Furthermore, the speech condemned the religious authority in the Ottoman Empire – the Caliphate, irrespective that several Indian Muslims who served under the British army aligned themselves with the Caliphate.

← Review of the Military Cooperation of India during FWW
Conditions of Indian Army on Outbreak of War →
Telegram to Viceroy, Foreign Department, from Baghdad